Shifts Of Syrian Conflict After Khan Shaykhun Massacre - It's Over 9000! 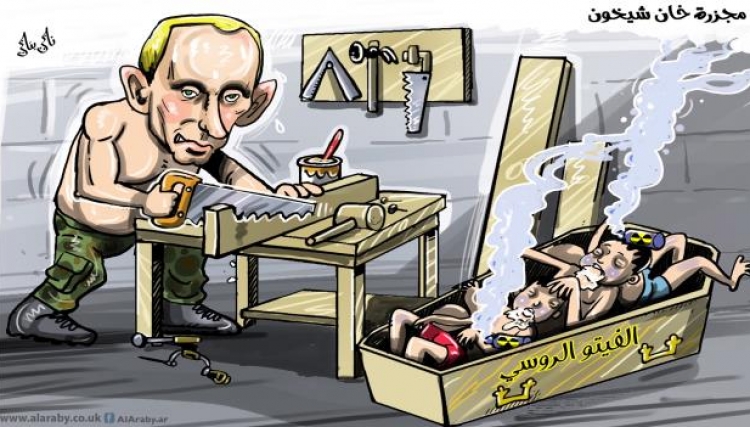 Massacre Of Khan Shaykhun…Changing the Rules of the Game

The international community led by the USA has continued to put pressure on Russia in order to stop supporting Assad's regime in a letter by the US Secretary of State Rex W. Tillerson with the support of the foreign ministers of the group of 7 (Italy, Canada, Japan, France, Germany, the U.K, and the USA) and those were joined by the foreign ministers of Turkey, KSA, UAE, and Jordan.

The American president Donald Trump now has an international political instrument to counter the bilateral terrorism represented in Assad's regime and the Iranian regime who threaten the international peace, and though the first strike was a slap on the face of Putin that revealed his deficiency to retaliate in person or through his agents, as such an action if done, would hasten the process of giving Trump a mandate by the Congress to supply the rebel factions in Syria with anti-aircraft weapons putting Russia in a dilemma similar to the one it experienced in the occupation of Afghanistan in the eighties of last century, the thing that would be too much to handle by Moscow which is already experiencing economic crisis.

According to the American perspective, Assad is now part of the international terrorism in the region and he was described by Trump as being an "animal and a butcher" which indicates that Assad is going to get a new American punishment as some American leaders have declared the end of Assad's family rule is close along with the US demands for Hezbollah to leave Syria immediately.

Those shifts in the attitude of the American administration force Russia to reconsider its relation with Assad, otherwise the US escalation will never stop till the uprooting of Assad and the expulsion of the terrorist Shiite militias from Syria.

Khan Shaykhun Massacre and the Political Shrapnel of "Tomahawk" Missiles

The chemical bomb used by Assad on Khan Shaykhun has claimed the lives of about 100 civilians who suffocated to death by Sarin gas and left behind more than 400 casualties. This crime was a shock to the international community and it caused the region to go into a phase of international-political interactions that were intensified after the US strike on al-Shayrat airbase in the countryside of Homs.

The Strike was a message to the Russians and the Iranians that president Trump is a man of action unlike his ancestor Obama who reacted only in statements to the chemical massacre of Assad in 2013.

The axis of Assad supporting countries "Russian and Iran" issued a mutual rhetorical statement that said: "The American aggression on Syria is a serious and flagrant transgression on the sovereignty of the people and Syrian state, and what happened in Khan Shaykhun was a trumped-up action by some countries and organizations to be taken as a pretext to attack Syria. The US has exceeded the red lines, so from now on, we will respond strongly to any aggression by whosoever. America  is pretty aware of our ability to respond and in response to this criminal aggression, we, as allies of Syria, will increase our support for the Syrian Arab army and the brotherly Syrian people in the various ways available".

After the massacre of al-Ghouta 2013,Vladimir Putin was writhing with fear because of a mere threat by Obama, so how would he deal with the current president which the Americans say that his actions are unpredictable?

The escalation by Russia and Iran is only verbal and the proof is that the Russian s400 missiles didn't intercept the American Tomahawks, the Iranians, on the other hands, trembled with fear as they realized that those Tomahawks can easily reach their bases in Syria, Iraq, Yemen, and the Arabian Golf.

And so the Iranian-Russian axis is working on containing the shock of the Syrians and raising the morals of Assad's army by making them feel that the Iranians and Russians will never allow any other strikes that affect the depths of the regime.

Russia has used the veto against the draft resolution by the United States, UK, and France to the Security Council that denounces the chemical attack on Khan Shaykhun and demands to hold the perpetrators accountable and so this is the 8th Russian veto against what Moscow considers (western attempts to topple Assad's regime).

Ten countries have voted for the draft resolution, including USA, UK, France, Egypt, Japan, Senegal, Ukraine, Uruguay, Sweden and Italy, while China, Kazakhstan and Ethiopia abstained from voting, on the other hand,  Russia and Bolivia have voted against the Western project.

Members of the Security Council had previously listened to a speech by the UN Special Envoy to Syria, Stephane de Mistura, who said: "We urgently need the key parties to reach a consensus in order to decisively support the UN-led negotiation process, and this is the ripe time to do so with the aim of the implementation of an organized, credible, agreed-upon, and irrevocable political transition process in accordance with Security Council resolution number 2254. "We have seen the horrors resulting from the use of chemical weapons against the innocent Syrians in Khan Shaykhun, and this outrageous act shocked the conscience of the humanity as a whole", he added.

On the other hand, in a political maneuver to waste time and dilute the central issue, Deputy Russian Ambassador Vladimir Savronkov said that "the United States, France and Britain are disturbing the work of the Security Council and even refusing to condemn the attack on the Russian Embassy in Damascus".

The massacre of Khan Shaykhun has changed the balances of conflict in the region and a motive for president Trump who is confused and restricted on the internal level, along with the rumors about his suspicious relation with president Putin, those reasons in addition to many others were behind the decision of attacking al-Shayrat airbase and the American determination to launch the attack was clear in the statements of president Trump. This attack was also an attempt by Trump to gain the trust of allies and to force the enemies to fear and respect him in a clear message that the US is back to the club of the mighty powers after the feebleness of Obama's administration. This return reassured the Arab Golf State, Turkey and Jordan who are concerned about the increasing Iranian influence in the region and made it clear that Russia has to change its policies that are conflicting with the American interests.

In this regard, the strike on al-Shayrat airbase led to shift the balances of power and put an end to the military whims of Putin in Syria along with outlining the possibilities of the confrontations based on many options, on top of which comes the American tendency to marginalize the Russians in Syria, while the other option is the military escalation by Moscow through intensifying its bombardment on the liberated regions and supplying its allies with sophisticated weapons along with launching new battles on the various Syrian fronts, however the Russian plans tend to avoid a military confrontation whether in person or through its agents as the Russian treasury can't afford the heavy expenses of such actions that may overthrow Putin on the internal level.

The third option is the political maneuver and the media disinformation to distract the attention from the chemical massacre of Khan Shaykhun though opening other files like that of the Ukraine, the missile shield, and other unsolved cases. While the last option is Putin to accept a political compromise in Syria that is to overthrow Assad and expel Iran out of the country and this is the option the United states is working on through putting pressure on the Russians, which will make them avoid a military clash in which they will inevitably lose.